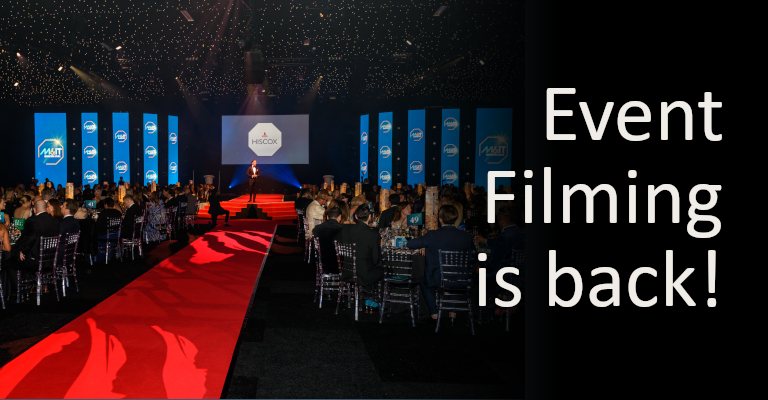 Like many other sectors, event filming and videography has taken a massive hit during the Covid19 pandemic.  And whilst we are far from being back to normal, live events and meetings are now back on the agenda.

Over the past month I’ve been back providing event filming services to M&IT (Meetings & Incentive Travel) who are now part of the Northstar Travel Group.  This included the M&IT Awards at Battersea Evolution and the M&IT Agency Challenge at Wyboston Lakes Resort in Bedfordshire.  And I must admit it’s been really nice.

Event filming is only part of what we offer at Video Artisan. But its a really enjoyable area of work to be involved in.  The attendees at these events are generally there to have a good time or further their careers.  They have a real positive vibe – which always lends itself to video production.

The two most recent event filming assignments are both organised by the industry-leading publications and events media outlet – M&IT Magazine.  I’ve produced a lot of content for them over the past decade. And they’ve used my output to generate interest in future events (see our Showreel for past events).

The M&IT Awards is an annual industry awards gala event held at London’s Battersea Evolution.  Regularly attended by over 1,000 suppliers and agents, they are commonly referred to as the industry’s Oscars.  Our event filming brief is to produce a short highlights documentary to give viewers a flavour.  In addition, we also produce short winner interview clips as they exit the stage having collected their award.

We’re always up for a Challenge!

The other event filming we provide M&IT Magazine with is coverage of their Challenge events.  These are networking meetings with a difference! Geared to specific sectors within the corporate travels and events industry attendees consist of both buyers and suppliers.  Divided into teams these compete in various outdoor and indoor physical, mental and creative challenges.  Spread over three days, buyers are also given formal presentations on destinations and services and have the opportunity to book one-on-one appointments to fully understand the suppliers’ offerings.

The event filming services we offer for the Challenge events is like the M&IT Awards – in that we produce a short promo film which M&IT then use to promote attendance at future events.  However, in addition we also provide one of the most popular challenges as part of the event itself.  Each team has to shoot a short, funny video on a given subject which we then edit according to their instructions.  These, usually hilarious films, are then shown on the final gala night dinner.

I can’t honestly say that I wasn’t concerned at all at getting back into event filming whilst we weren’t completely shot of Covid-19.  Gathering hundreds of people together in one venue – from literally all over the globe – could have resulted in a serious super-spreader event.  This was especially true of the M&IT Awards night.  However, my faith in the guys in M&IT to take every conceivable caution in keeping everyone safe was well founded.  Likewise with the Challenge events.  Everyone took the Covid restrictions seriously – but everyone was equally ready for face-to-face networking and made both events a great success.

Getting your event back on the calendar

If you’re planning your next real-life event – and want to capture it on film for promotional purposes – please give us a call.  We can cater for any size of event from single-camera coverage to multi-camera live streaming.  Event filming has become one of our areas of expertise and we’d be more than happy to talk through your options.