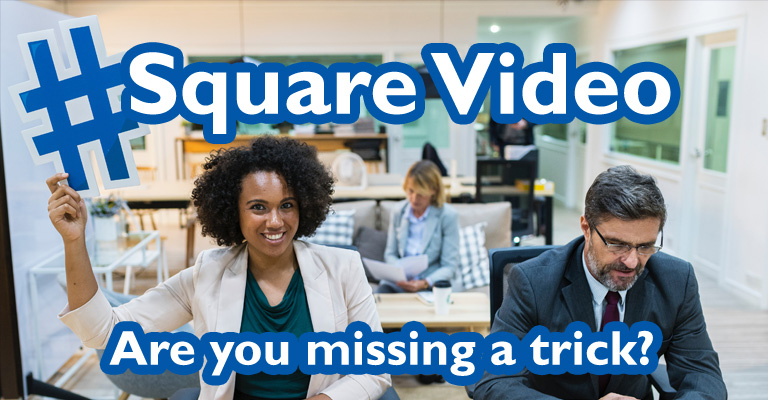 Have you seen our SQUARE video advert and need a quote? Email us now. Need more facts and figures? Then read on!

As someone who has been involved in video production for over 30-years, I’ve had it pretty easy when it comes to creating a universally-accepted ratio for video content. Since the early 90s, after the European Union launched something called, “The 16:9 Action Plan”, that’s pretty much all we’ve been creating.

As with many things in life, TV content and technology and the way we chose to consume it, are constantly changing. Today we are more likely to view video content on our phone, tablet or desktop computer than a traditional TV set. More importantly, it is usually consumed within an application, a website or social media platform – and not necessarily (in fact, rarely) played full-screen. Video content has become a feature within something else – most usually a social media platform.

In these surroundings the shape of the picture is less restricted. Most professional video editing software will let you create quadrilateral (four sided) images of any ratio – and in this article where going to discover the growing importance and value of 1:1 Square video.

Don’t be a square – use Square Video

The inspiration behind this article is the growing number of requests we are getting to create Square Video. It’s easy to understand why we’re seeing this increase because our clients see Square Video everywhere on social media. It’s hard not to notice it. We’ve also made a conscious decision to create all our own promotional content as Square Video.

The big attraction of Square Video is that it occupies a far greater amount of real estate on social media platforms – especially on mobile devices. Compared to video created at 16:9 widescreen ratio, Square Video takes up nearly 80% more screen space. If you’re trying to attract attention, or you are paying to promote a video on social media, this is a real and valuable advantage.

There’s been lots of discussion about the use of Square Video on the Internet and one of the most worthy and interesting articles is a report published by Buffer.com (see here).

In this report, Buffer invested $1,500 in promoting a variety of videos on the key social media platforms – produced in a variety of different picture ratios and layouts – and measured their effectiveness and return on investment.

Their findings are pretty conclusive. In essence, if you want to increase the visibility of your video – create it as a Square Video.

Now some of this research acknowledges that Square Video’s efficiency and footprint is impacted by the device it’s being watched on. On a laptop, video shown in a social media feed occupies a much smaller area, regardless of its aspect ratio.

This footprint size is very different on a mobile device – and this is the most common way we are accessing the Internet and social media platforms. The latest stats show that more than half the website traffic worldwide (around 53%) is generated through mobile phones. In parts of Asia and Africa it’s more like 60%. You can read more into these statistics on Source Statista

We all understand the value of social media in promoting brands, services and products – or indeed influencing an audience to react in a certain way. But many businesses base their entire marketing strategy on social media engagement. The number of users on the most widely used platforms are quite staggering.

A jaw-dropping 92% of Facebook users access the platform on their mobile phone. If we wind back to the increase in real estate Square Video offers over 16:9 video (nearly 80% more visible) you can understand why most serious users of social media video are creating video this way.

Buffer’s research shows that Square Video outperformed 16:9 video on all social media platforms. This was measured in relation to views, engagements (shares, likes and comments) and completions (when the entire video was watched). Some of their test videos achieved up to 35% more views and up to 100% increases in engagement.

There’s still plenty of capacity and screen time left for traditionally formatted video – and many situations where Square Video is just not suitable. For instance, if you’ve created content for full screen display. In this situation the shape of Square Video will mean it will have a much smaller footprint when shown on a 16:9 display.

This is also true of video embeds on your website viewed on a laptop. Laptop screens are almost all 16:9 and Square Video just cannot fill them.

What it does mean though is that next time you commission a video you will need to have a conversation with your production company about how their ideas will translate to the small screen and social media feeds. Ideally, you’ll get content that will work for both.

There’s also a great opportunity in re-purposing 16:9 films you’ve had produced in the past. The most basic way to do this is to zoom into the 16:9 video – making sure that the best possible framing is maintained by digitally panning and following the action.

Better still is to use a process called, ‘Letterboxing’. This basically means positioning the 16:9 video within a Square Video frame. The unoccupied part of the frame can then be used to include subtitles, branding or any other graphical element that will help you to capture the audience’s attention. Interestingly, Buffer’s research shows that Letterboxed content was sometimes even more effective than Square Video.

Or you could even just leave this space blank, creating separation between your media and the other content in a social media feed. (see below on how we can help you re-purpose your existing 16:9 video content)

It’s universally accepted that attention spans are getting shorter. Some time ago YouTube suggested that social media videos should be no longer that 90-seconds – but even that’s too long for an Instagram video advert (limited to 60-seconds).

That shouldn’t be a barrier to video being able to achieve what you want it to do in a social media feed – and that’s simply to get your target audience to engage with it. This could be as simple as liking, sharing or commenting on it – but equally it could mean clicking through to purchase.

This ‘Past Touch-Point’ path is obviously critical in measuring the success of any social media campaign – but at the very least you need to tell the viewer what you want them to do next – what is referred to as a ‘Call to Action’. This could be as simple as a graphic saying, “click here for further information”.

Another very important consideration is that when video content appears in a social media feed it is mute. If it wasn’t it would get very annoying! This means you’ve either got to have exceptionally engaging images to attract the viewer in, or captions and graphics telling them why they should. This is probably one of the main reasons why Letterboxed Square Video works so well as there’s plenty of uncluttered space to show it.

This muting feature can be used to your advantage though – especially when the video content includes people talking to camera. Whilst these should always be subtitled, people are generally lazy and will feel compelled to click on the un-mute button rather than read. The secret here is to make sure their first spoken words are compelling.

Get going with Square Video

Whereas quadrilateral video is the norm now, who can guess where video shapes and ratios will head in the future? I’m sure that any shape, or indeed any dimension, is possible. Video that wraps around is already here with flexible screens. As throughout the history of technology, much of this will be driven by the devices and platforms we use. But for now, Square Video is really where you want to be.

We are more than happy to talk to new and existing customers on how we can help them increase their social media feed real estate. Or, if you have existing video and want to see if this is suitable for adapting to the Square Video format, please get in touch. It might be a lot cheaper than you think!