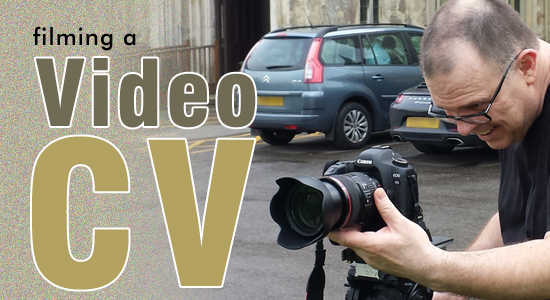 Would a Video CV be right for you?

This week I’ve been at the marvellous Ashridge Business School (www.ashridge.org.uk) in Berkhamsted, Hertfordshire shooting a Video CV with my colleague, and often fellow-shooter, Dilip Patel from double-barrelled.tv

The Video CV (or Visumé, or VCV or Video Resumes) is nothing new. When video cameras became commonplace there were some recruitment specialists who thought that they were going to replace the written curriculum vitae altogether. That obviously didn’t happen – for a number of very good reasons. Firstly, they are not suitable for every job position – and not all potential employers would find them useful. Employers cannot quickly scan through a Video CV – and they can also, “allegedly”, leave the employer open to allegations of discrimination. There’s also the fact that some candidates would be completely terrified at the thought of having to project themselves positively on screen.

In addition, a Video CV will also add to the costs and time involved in gaining an interview – and it will always need to be accompanied by a written curriculum vitae as the inclusion of full educational and employment histories would make for a very dull video – especially when the candidate has extensive experience.

However, there are situations and job prospects where a Video CV is absolutely perfect and could help to set you above other candidates. This is especially true when the position entails face-to-face communication and the employer is looking for someone with exceptional presentation skills. In these situations a Video CV can be exceptionally good at revealing your enthusiasm, how you engage with an audience, your knowledge, confidence and your personality. Whilst you can say all these things in a written curriculum vitae, in a Video CV you can make them a whole lot more believable.

I’m sure you will understand why I’ve not including details of the person we were shooting the Video CV for. At the time of writing this piece the video had not been released by the client – and there’s a reasonably good chance that it will not be publicly released at all. Confidentially issues are obviously high on the agenda in these situations so it is always something that has to be talked through with the candidate and faithfully observed.

Suffice to say that this person was pitching for an executive-level appointment within an industry which values and rewards exceptional communication skills and creative thinking. Our candidate was blessed with both, and the interview-style Video CV enabled them to communicate this and give any potential employer an understanding of their expertise, industry connections and successes. These things can obviously be set out within a written curriculum vitae, but on video you can deliver them with personality and passion.

Whilst a Video CV can be shot pretty much anywhere, Ashridge Business School was chosen because it has an excellent reputation in educating business leaders. As our candidate was a previous degree student at Ashridge the venue also added some relevance to the piece and was referenced to within the interview. This gave us the opportunity to shoot some b-roll shots around the grounds to help carry the interview along – and at the same time gave the piece additional credibility.

Not every Video CV has to be produced this way but it was perfect for this candidate and the positions they are seeking. There is not a “one size fits all” solution to producing a Video CV so each commission needs to be considered carefully and creatively to produce something that’s right for the candidate and the employment they seek. No two Video CVs should ever be the same.

I was working freelance for Dilip on this occasion. We often work for each other and have a great working relationship where we both concentrate totally on creating the best possible content for our clients – whoever they “belong” to.

On this occasion we were shooting on two Canon 5D Mkii’s, one as a “safe” shot and the other shooting “dirty” (wide of set including lighting rig and camera one, shot of camera monitor screen, pull focussing etc.). We also had a Canon 550D on a slider placed on the table in front of our candidate and we took turns in giving that a whiz during various takes.

Lighting was great in the room we were in with its floor to ceiling windows, but we added the sparkle on the candidate’s eyes by using my Lishuai LED lighting panels. Dilip handed all the audio side which was via cabled tie-clip mic and an additional stand-mounted directional mic fed back to his mixer and Tascam recorder. The audio would be synced up in post, which was again in Dilip’s hands.

How much would a Video CV cost to produce?

There are some situations where a home produced Video CV would be perfectly adequate and some where it certainly wouldn’t. In these situations you need to use a professional who is going to be able to create something credible for you. Apart from any pre-production planning and script development, for a relatively simple Video CV format the filming itself shouldn’t take any more than half a day to complete and, as long as there’s a clearly defined brief, no more than a day to edit. You can work out ballpark figures using my freelance rate card here.

The budget is however always wholly governed by the creative brief. A more complex idea might involve many more days filming, at various locations, with additional crew and kit requirements. This is normally quickly established in a confidential briefing with the delegate during which ideas, budgets and objectives can be discussed and agreed.

If your next appointment really matters, a Video CV might be just the thing to get you noticed. If you think this might be right for you, then please do get in touch.