The Eiger Safety film is nearing the point of being in the can – after which we’ll move on to the mammoth edit.  We recently shot some really nice scenes at Christ Church Oxford where Eiger have installed and maintain their roof and high level latch-way systems.  This includes the main college buildings, Tom Tower and the Cathedral Church.

I must admit – I felt very privileged to be climbing over one of this country’s finest buildings.  On arrival we climbed Christopher Wren’s Tom Tower (so named after Great Tom – the bell itself) which was built in 1682.  This area is not accessible to the general public and is accessed via an amazing wooden spiral staircase which takes you right up to the bell itself and is covered in graffiti from every century since construction.  I reckon if you studied the graffiti long enough you’d discover some very famous names amongst them.

Besides being nosy the point of climbing Tom Tower was to get an idea of the various points around the site that we wanted to get shots of. I knew then that this was going to be a full day – and a whole lot of fun.  On the way back down we caught Tom striking the hour and I filmed it on my mobile. Beware – this is loud…

We started shooting video on the main building roof as it enabled me to get shots of the guys working on Tom Tower and on the Cathedral from the same spot.  The following pictures gives you a better idea of scale and also shows the point from which we had reconnoitered the site earlier – plus the team posing for a shot on the Cathedral. 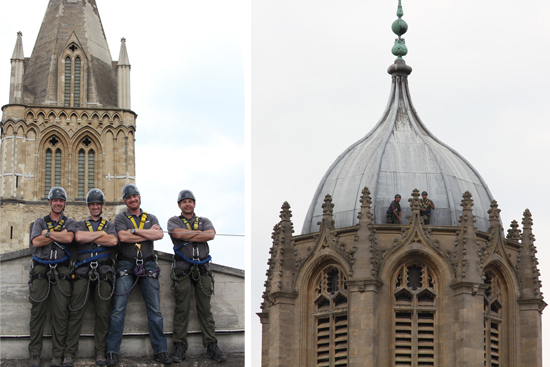 The day ended inside with some shots of the guys working in the upper archways within the Cathedral.  This was a brilliant experience for a couple of reasons.  Firstly, this is an impressive building and to be walking around above the tourists and visitors below was just amazing.  Secondly, there was a recital being performed and recorded whilst we was there so we had a wonderful soundtrack to work to as well.

The day eventually came to an end with a fun shot that you’ll have to wait and see in the final film.  I hope it works!  There’s still a couple of shooting days left, including a couple of Central London sites and the Clifton Suspension Bridge at Bristol (which got cancelled last time due bad weather).  There’s also a chance that I might have to film some work at the Force India Formula 1 centre – which I’m keeping my fingers crossed for.

What a great project this has been.